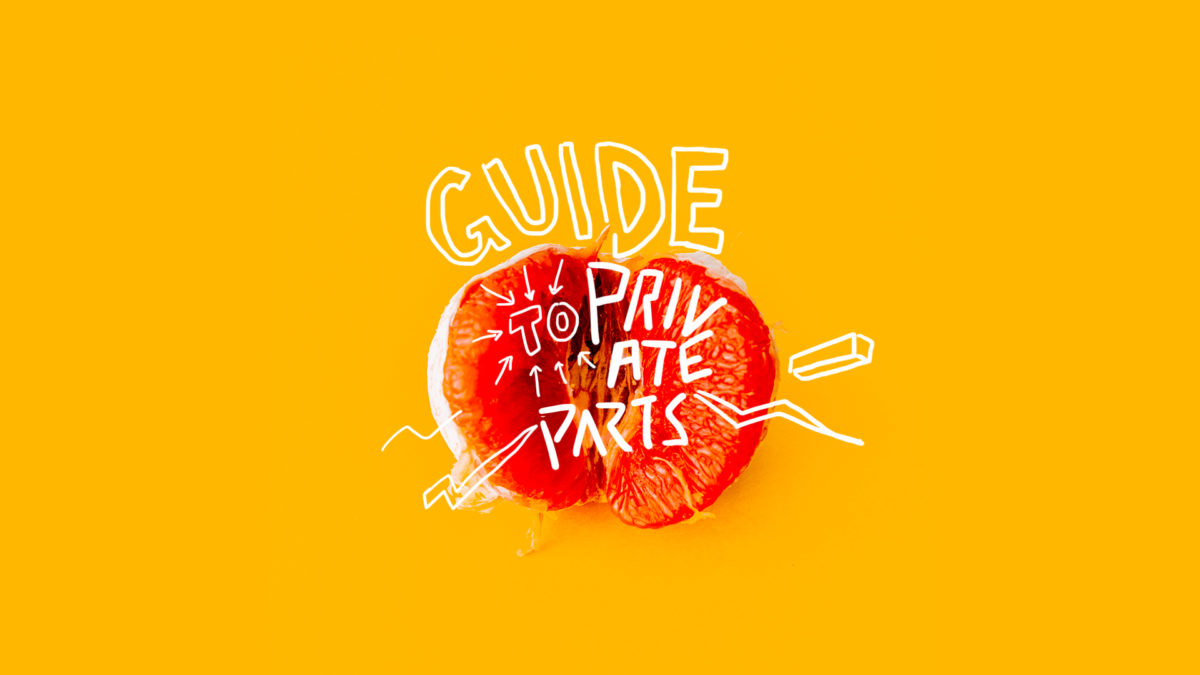 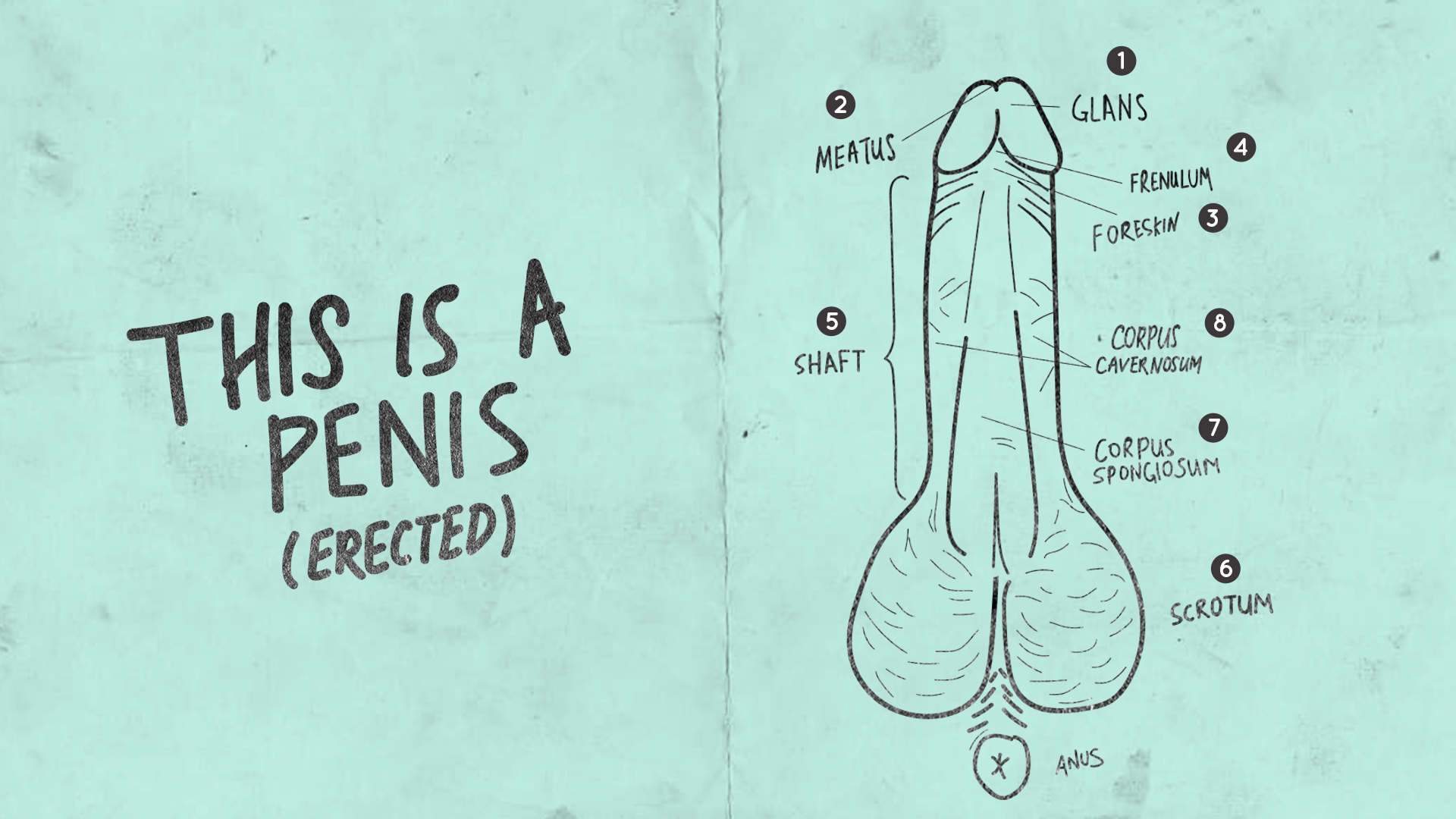 #1: Glans aka The Head: The head of the penis and highly sensitive.

#2: Meatus aka The Opening: At the tip of the Glans where your urine and semen greets the world.

#3: Foreskin aka The Retractable Turtleneck: The Foreskin covers the Glans but retracts when the penis is erected. It is removed during circumcision leaving the Glans bare.

#4: Shaft aka The Body: The part that connects the Glans to the body and also the longest part of the penis (hopefully).

#5: Frenulum aka The Sensitive Spot: The underside where the Shaft meets the Glans. It’s one of the most sensitive spots on the penis.

#6: Scrotum aka The Ball Sack: The loose skin that houses the testicles out of the body so they don’t overheat like a Windows XP running Photoshop. 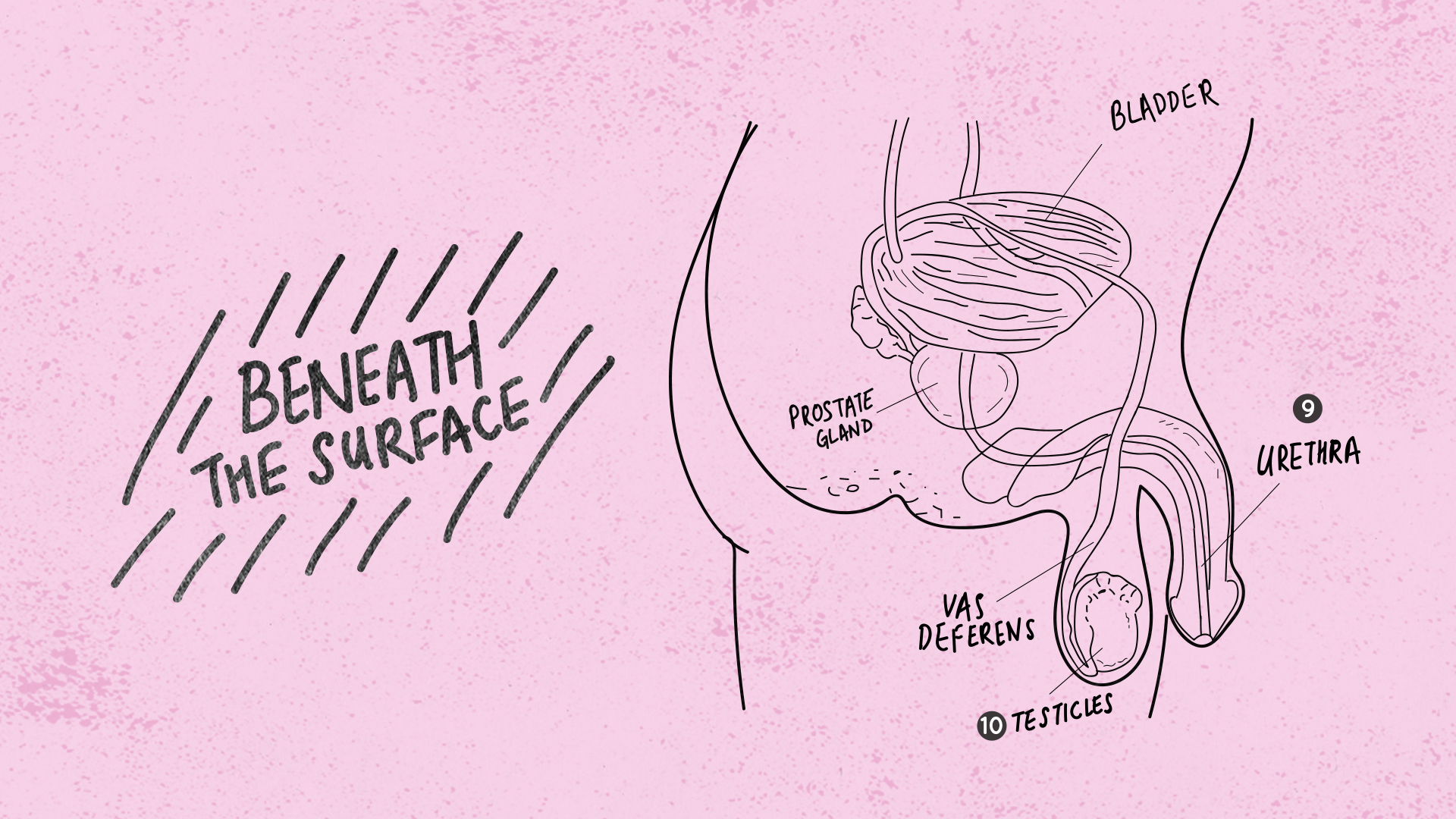 #7: Corpus Spongiosum aka The Spine: A column of tissue that runs from the base of the penis to the tip. It connects the Glans to the rest of your body and also houses the urethra. It expands as blood rushes in but it’s not the MVP when it comes to erection.

#8: Corpus Cavernosum aka The Twin Towers of Erection: Two spongy tissue columns that run side by side and are connected where they touch. Blood rushes in during erection causing the increase in size and hardness.

#9: Urethra aka The Universal Tunnel: The tube your urine and semen travels to get to the Meatus.

#10: Testicles aka The Balls: Responsible for producing testosterone and semen. Guard them well in a fight. One testicle usually hangs lower than the other so they don’t hit into each other. 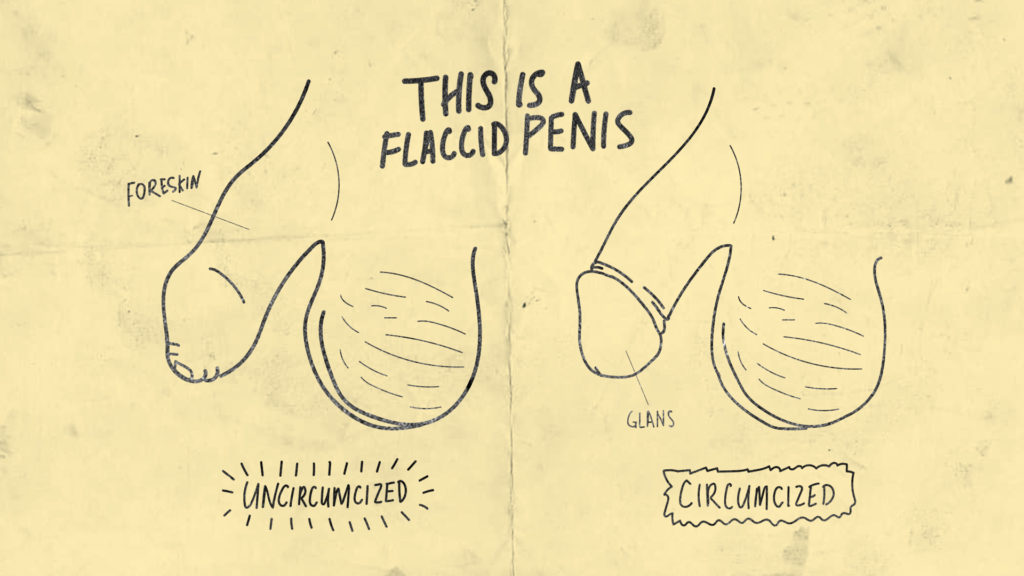 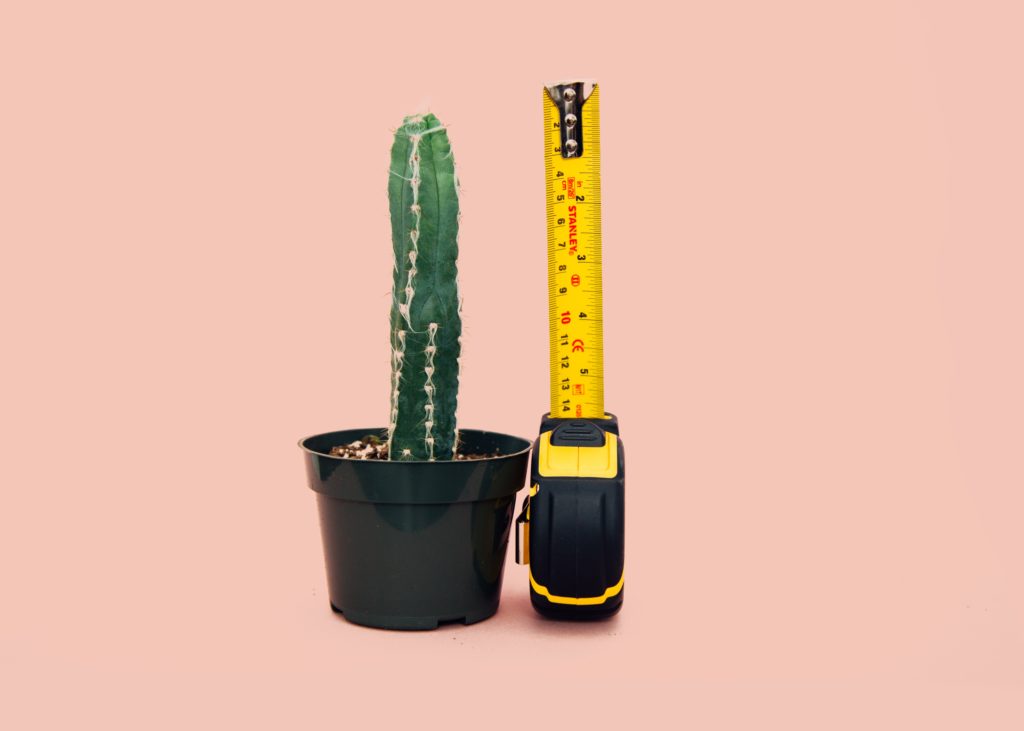 Before you get into a dick measuring contest, know that size isn’t everything. And if you find your penis size inadequate, you are in good company. In a survey conducted, only 55% of men are happy with their penis size. The good news? 85% of women are actually happy with their partner’s penis size, so don’t beat yourself up over it, chances are that your penis is doing just fine!

Terminology
When most people say vagina, they are referring to the entire female genitalia, but that’s like calling your house ‘living room’. The vagina is only part of the team and is the canal that leads into your cervix. Everything else that you see on the outside? That’s the vulva.

Vulva – All the bits on the outside 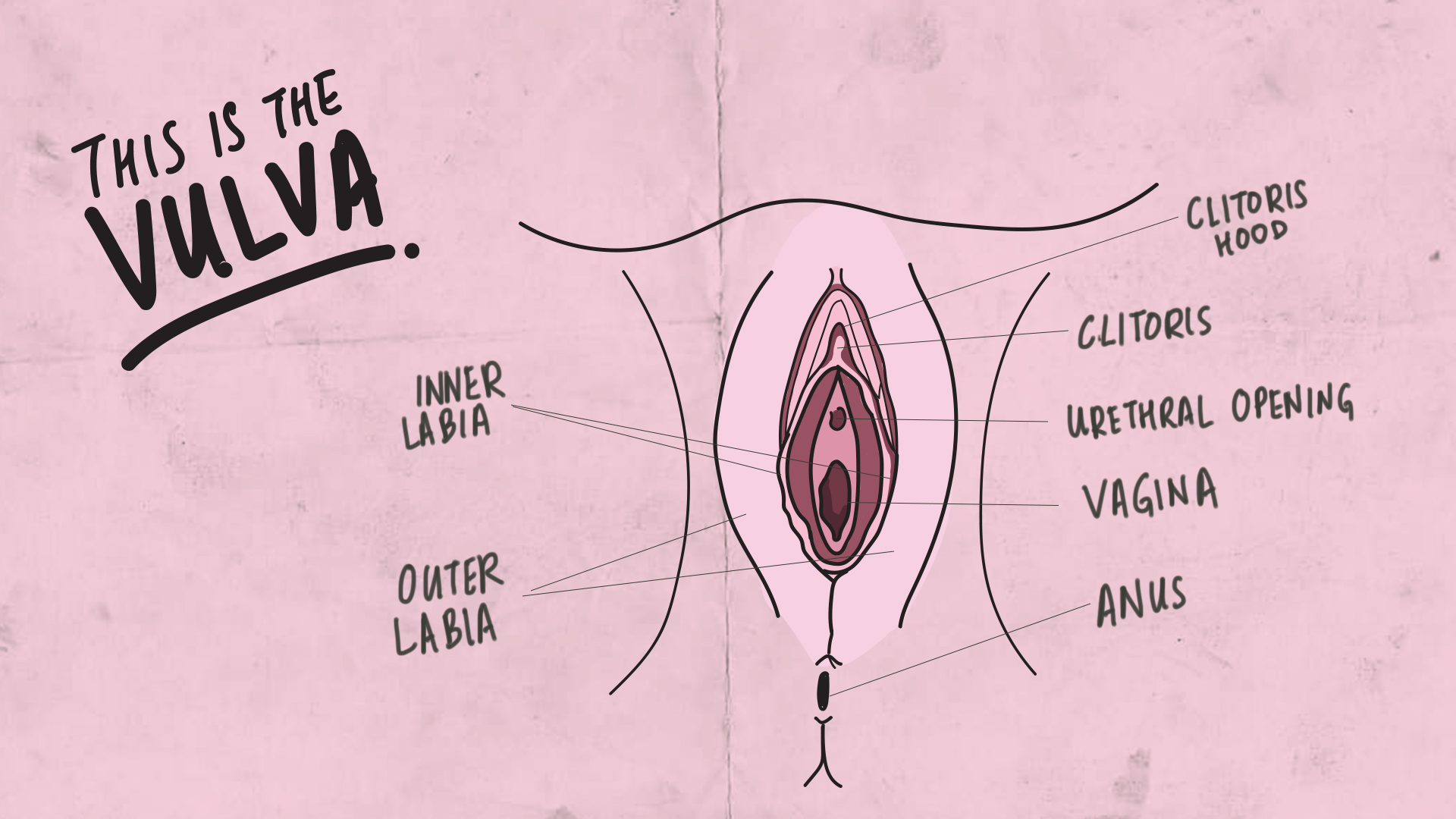 Clitoris aka The Sexual Hot Spot: At the top of the vulva, sits the clitoris, the only organ on the body whose sole purpose is sexual pleasure. With over 8000 nerve endings (twice that of the penis Glans), the Clitoris is the most sensitive spot on the body! In fact, most women need their Clitoris to be stimulated to achieve orgasm. 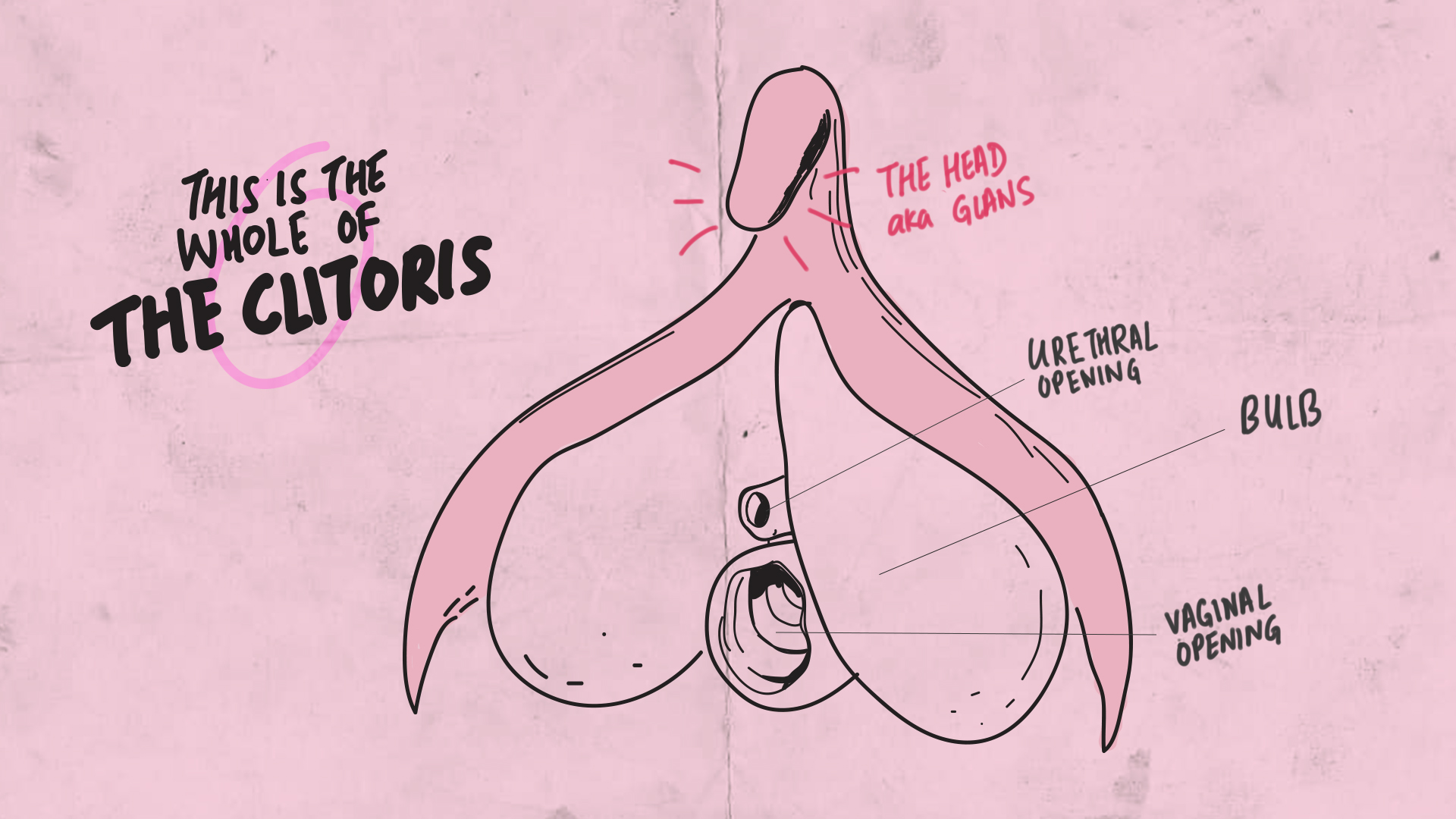 Like the penis, it’s head is also called the glans and that’s the visible bit that sits just under the clitoral hood. While most people think that the clitoris is just its glans, it is actually a much larger organ beneath the skin with erectile tissue (corpora cavernosa) like that of the penis. Therefore, the clitoris also swells with blood when excited.

Urethra aka The Urine Tunnel: Where your urine meets the world.

Labia aka The Lips: The labia is the skin around your vaginal opening, urethra and clitoris.

The outer Labia (Labia Majora) is fleshy with pubic hair while the inner Labia (Labia Minora) starts at the clitoris and ends at the vaginal opening. When sexually stimulated, blood flows into your labia swelling it.

Vagina – The Real Deal Inside

The vagina connects the vulva to the cervix and is most sensitive and pleasurable near the opening. Responsible for getting semen to the egg, getting menstrual blood out of the body and getting babies into the world, the vagina can get quite busy during adulthood.

Cervical Fluid
You’ll notice that the vagina releases a fluid, especially when it’s aroused. Don’t worry it’s completely normal and it does not contain any waste. The fluid helps with lubrication during sex and contains mostly mucus, cells and healthy bacteria. The amount of liquid and how thick it is depends on your ovulation cycle. It gets increasingly wet and transparent in higher quantity towards ovulation.

Near the vagina opening. Formerly known as the hymen, the corona is a mucous tissue surrounding the opening of the vagina. The myth that the corona tears and bleeds when sex first happens simply isn’t true. The corona varies from person to person and seldom covers the entire vaginal opening. Some might tear the corona even during exercise while others with a loosely folded corona might not feel a thing at all.

G-Spot
A little further in and we’d arrive at the G spot, or Gräfenberg spot. It sits 5-8 cm up the front vaginal wall and can be very stimulating for some people. However, if you do not climax from vaginal intercourse or G-spot stimulation, there’s no need to panic. In fact, you’d actually be in the majority as studies report that only about 25-35% of women usually climax from vaginal penetration.

We will be uncovering more information on sexual health and more in the upcoming articles. If there are any other questions that have been bugging you but is too awkward to ask, drop us a note and we might just do the legwork for you! In the meantime, follow us on Facebook and Instagram to stay tuned for more!